The Demographics of Internet Users – Who Are We?

Posted on by admin

Just received a google alert about the release of data from Pingdom on the growth of the Internet in 2011. Fascinating data but there’s something missing – it doesn’t report on who we are. Email usage – huge. Website growth – no stopping it. Internet usage around the world – the US is big but certainly not the biggest. The only data reported on demographic characteristics is age – 45 percent of Internet users are under age 25.

I find it really hard to put these data to use helping clients understand how to effectively use the Internet and reach their ideal customer. It’s great to know the Internet world is expanding at a rapid pace but I need to know who the users are and how best to reach them. Guess that’s the price of being a demographer and always wanting more out of the data. After all, how does anyone know the age of Internet users unless they do a sample survey or rely on Facebook users giving their birth dates?

So much for the griping about more data. Here’s some of the other interesting stuff coming from Pingdom: 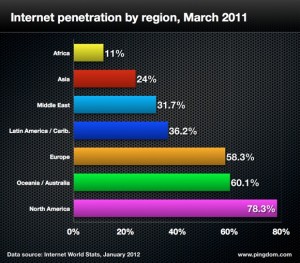 I’m used to a world of demographic data that is location based like the Census. It’s relatively easy to interpret population numbers for a community or county. But this new world of Internet and social media use – worldwide – is a completely different animal and has some many different applications in the business world.

A new horizon to explore!!